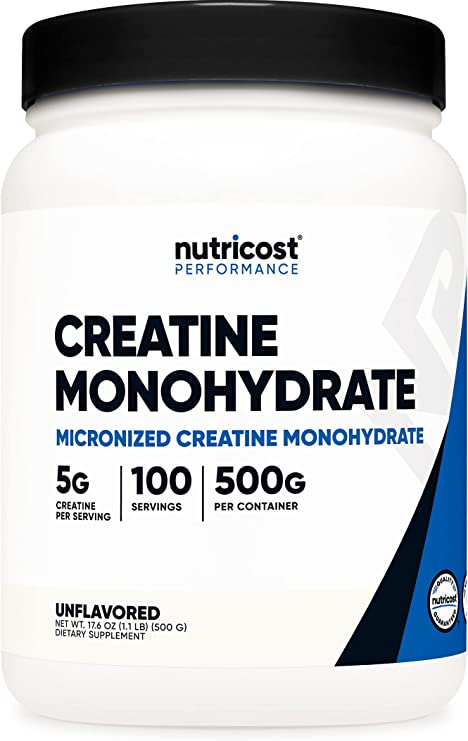 Yea, its me again . As you guys know, I’m now posting good deals on nutritional supplement that I USE and here’s a pretty sweet deal on creatine. Creatine is one of my favorite supplements and its good for strength and endurance along with helping to build muscle. On Amazon, you can get a half-kilo of Nutricost Creatine for $25.46. Why Amazon???….BECAUSE ITS FREE SHIPPING. A half-kilo is about 100 servings so here’s some more information on it for quality purposes

Creatine is a nitrogenous organic acid that occurs naturally in the body, mostly in the skeletal muscle. It is synthesized from the amino acids arginine, glycine, and methionine and is converted into a molecule called phosphocreatine, which is used to produce energy during high-intensity exercises. Creatine has been extensively studied for its effects on physical performance, and it is one of the most popular supplements among athletes and bodybuilders.

Creatine is found in small amounts in some foods, including red meat and seafood, but it can also be taken as a dietary supplement. When consumed in high amounts, it can help improve muscle strength, power, and size. It may also have some other benefits, such as improving brain function and preventing neurodegenerative diseases.

Creatine supplementation has been shown to increase muscle phosphocreatine levels, which can help improve power output during short bursts of high-intensity exercise. This makes it particularly useful for sports that require short bursts of power, such as sprinting and weightlifting. It can also help improve muscle endurance and reduce muscle fatigue, which can be beneficial for long-duration exercises such as distance running or cycling.

One of the primary mechanisms by which creatine enhances muscle function is by increasing the availability of ATP, the primary energy source for muscle contractions. ATP is produced through a process called cellular respiration, which occurs in the mitochondria of cells. Creatine supplementation can increase the production of ATP by providing an extra source of energy in the form of phosphocreatine.

In addition to its effects on muscle function, creatine has also been shown to have some other potential health benefits. Some studies have suggested that it may help improve brain function, including memory and learning. It may also have neuroprotective effects and may be useful in the treatment of neurodegenerative diseases such as Parkinson’s and Alzheimer’s.

Creatine supplementation is generally considered safe, with few reported side effects. However, it is important to follow recommended dosages and not to exceed the upper limit of 5 grams per day. Some people may experience digestive issues, such as bloating and diarrhea, when they first start taking creatine. These side effects are usually temporary and can be avoided by starting with a lower dosage and gradually increasing it over time.

Creatine supplementation is not suitable for everyone. It is not recommended for children or adolescents, as the effects of long-term supplementation on growth and development are not yet known. It is also not recommended for people with kidney disease, as it may worsen their condition. If you have any underlying health conditions or are taking any medications, it is important to consult a healthcare professional before starting a creatine supplement.

In conclusion, creatine is a popular supplement among athletes and bodybuilders for its ability to improve muscle strength, power, and size. It can also have some other potential health benefits, such as improving brain function and preventing neurodegenerative diseases. While it is generally considered safe, it is important to follow recommended dosages and to consult a healthcare professional if you have any underlying health conditions or are taking any medications.

There is a counter on Amazon as to when the sale ends which is about 10 hours from now. Thats about it for today. Peace And A Jar Of Hair Grease. Click Below If You Want It